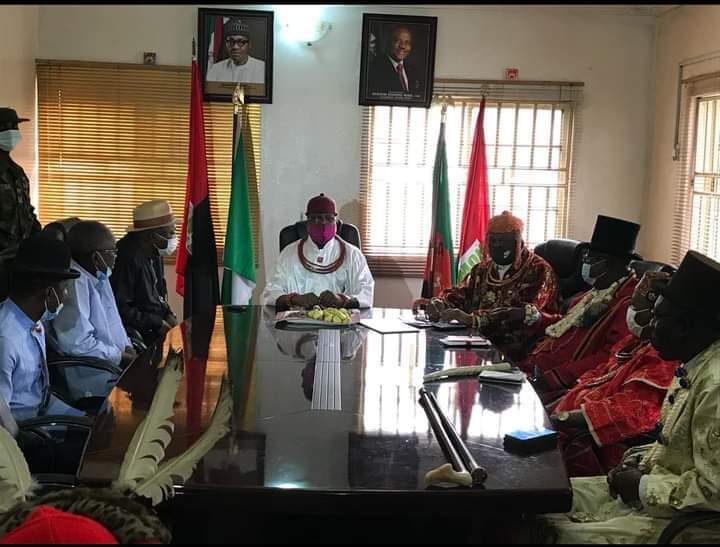 The Interim Administrator of the Presidential Amnesty Program Col. Milland Dixon Dikio (rtd), yesterday, as part of his “Back to the Region” tour of the Niger Delta met with the Association of Niger Delta Monarchs of Nigeria in Port Harcourt the Rivers State Capital.

He was received by the Executive Chairman/General Coordinator of the association, His Majesty King (Captain) F.N Okurakpo Odhe ll(JP),  the Odio-Logbo Of Okugbe Isoko Kingdom and his Council at their liaison office in Port Harcourt.

Speaking at the meeting Col. Milland Dixon Dikio(rtd) said he has come to see the monarchs to draw from their wisdom as he embarks on the onerous task of repositioning the Presidential Amnesty Programme.

“The Amnesty Programme is clear, it is centered on the Disarmament, Demobilisation and Reintegration of the ex-agitators. Therefore, this programme is for the thirty thousand ex-agitators who embraced the Amnesty Proclamation by the Late President Umaru Musa Yar’Adua in 2009. However, it also includes what is called the “Impacted communities”. Since these people live in your domain, I have chosen to come and see you the Royal Fathers. Also, I want to help in restoring that age-old respect for our traditional institutions and our elders, who are the custodians of the fabrics that hold our people together and helps to preserve our traditions and cultures.”

The Interim Administrator told the Monarchs that his ultimate aim in embarking on this back to the region tour is for the Presidential Amnesty Programme to look at ways to cooperate with state governments, local governments and other agencies of government with a view to synergize and make the Niger Delta the safest place to live and do business in the country.

The Executive Chairman/General Coordinator of the Association of Niger Delta Monarchs appreciated Col. Milland Dixon Dikio (rtd) for his decision to bring the Programme back to the region but also admonished him not to deviate from the original master plan of the Amnesty Programme in order to ameliorate the grievances that led to the agitations and subsequent armed struggle in the Niger Delta.