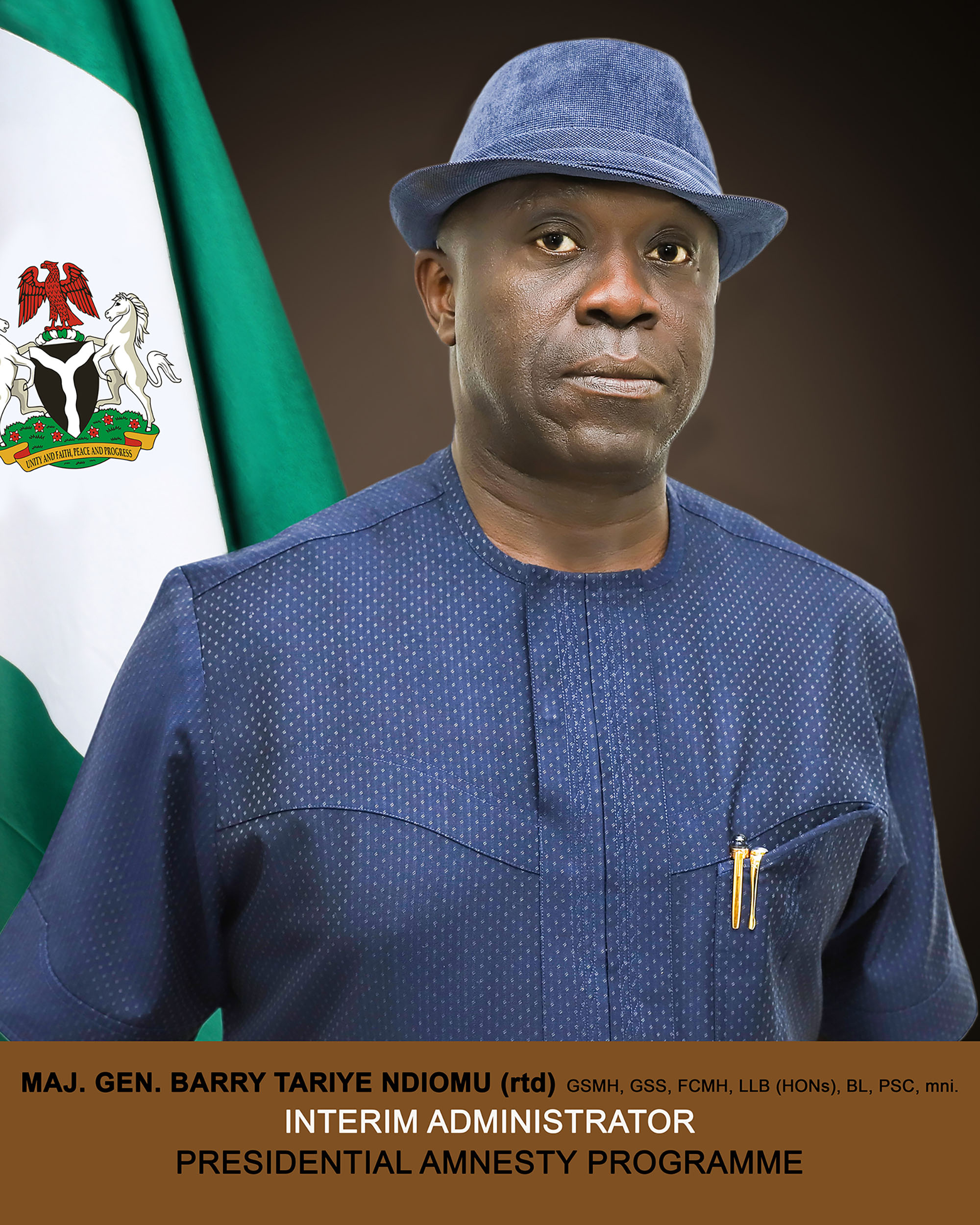 The attention of the Interim Administrator of the Presidential Amnesty Programme, Major General Barry Tariye Ndiomu (rtd) has been drawn to a vexatious report making the rounds in the media claiming that the indefatigable Amnesty boss has declared some ex-militant leaders such as HRM Ateke Michael Tom, Government Ekpemopolo aka Tompolo, The young shall grow wanted for financial infractions.

It bears repeating here as always that we do not, as a matter of policy, make a habit of responding to everyone in the public space but we are particularly miffed by this uncharitable clandestine, baseless and caustic story. Hence, we are forced to take exception to this standing rule as a result of the weighty narrative already pushed out by some indolent purveyors of falsehood. Having said that it is important that we set the records straight in the interest of peace, harmony and concord.

We need to restate that the Interim Administrator has an excellent relationship with the ex-militant leaders and efforts to fracture that friendship will end in futility.

Therefore, the purported declaration is totally incorrect, an abstraction, if you will from the docile faculty of mischief makers because there is no basis to declare anyone wanted. Indeed, it is the most obnoxious report ever invented by the sons of mischief to create a seemingly none existent rift between the Interim Administrator and the gentlemen mentioned in the report.

General Ndiomu as a law officer in the temple of justice will not descend so low as to arrogate unto himself the powers of the law enforcement angencies. It is not his place to so do, given the copious provisions of the 1999 constitution of the Federal Republic of Nigeria.

The peddlers of this untruth have only succeeded in displaying the content of their vacuous minds in the public domain.

We adjure the public to discountenance and ignore the said story. The said story is a product of the figment of imagination of con artists whose intent is to cause disaffection and confusion in the region.

It is necessary at this juncture to reiterate the fact that the Interim Administrator will not be cowed nor intimidated by this charlatans who are uncomfortable and disoriented by the concerted efforts being made to sanitize the system in line with international best practices.

Instead, General Ndiomu remains resolute, forthright and unwavering in his commitment to the ideals of the amnesty programme. And no amount of campaign of calumny will dwarf his sterling leadership qualities. More importantly, General Ndiomu is in the verge of setting a new agenda, a new plausible narrative that fits the temperament of the Niger Delta region. Therefore, the IA is a true avatar of change that should be supported and not vilified for the good of our youths and the entire region.

Previous PUBLIC ANNOUNCEMENT!!! Next Police To Recruit Ex-Agitators In The Niger Delta Region