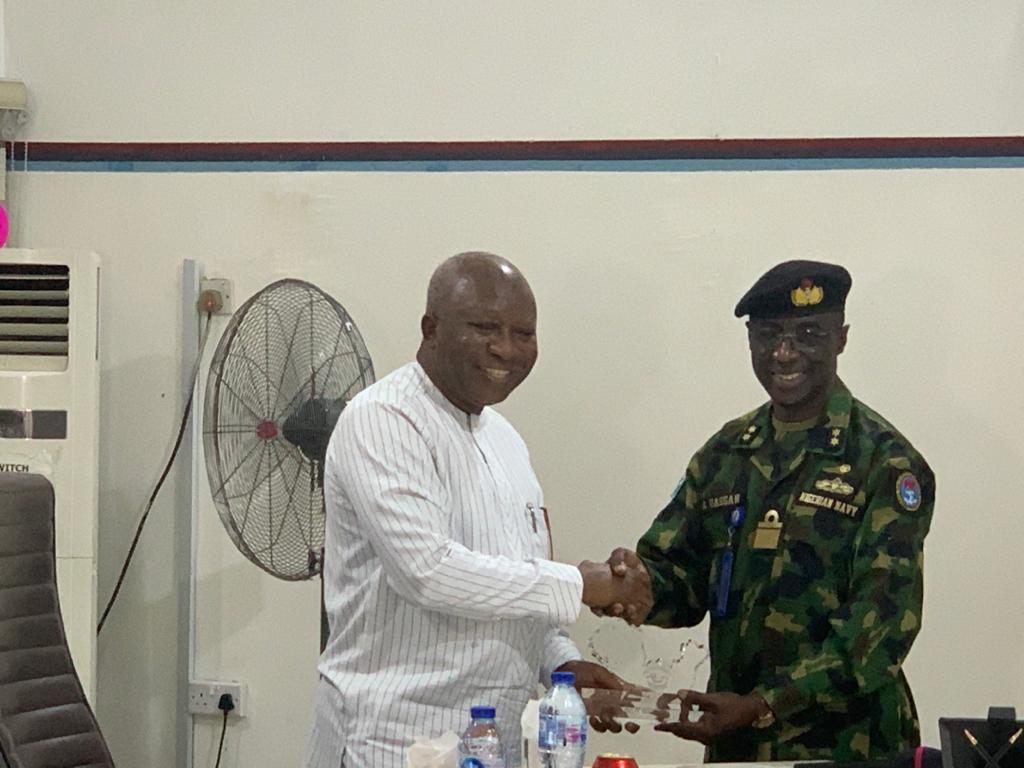 Hassan attributed the calmness in the Niger Delta to Dikio’s constant engagement with ex-agitators and his prompt payment of their monthly stipends.

The JTF commander, who also described the Amnesty office as critical to the sustenance of the peace in the region, said Dikio was making the job of JTF easier by giving ex-agitators in the Niger Delta a sense of belonging.

According to Hassan, “Your area of assignment is of interest to us because whatever is happening there has a ripple effect on us. If there is peace in the work you are doing, we can feel the peace and we can also touch it and know there is peace. But if there is no peace, we are the first line of defence for that.

“But we can see there is peace. We appreciate your good work. Some of us have been following all you have been doing in that area. Since you took over there have been two key strategies you adopted that I believe are the way to go.

“One is that you are always around the ex-agitators and that is a very good strategy. You are always with them. You hear from them and you talk with them. We are all human beings and all us need that sense of belonging and when we have it, it reduces tension and pressure.

Hassan also commended Dikio’s for taking the decision to begin the gradual empowerment of all ex-agitators, who were previously trained on skills but had remained jobless.

He appealed to the PAP boss to take his vision on food security seriously.

He also encouraged him to remain resolute in his decision to actualise the mandate of PAP for the region, despite forseeable obstacles.

The JTF commander described the Strategic Communication Committee set up by Dikio as PAP’s first line of defence, saying the committee should be encouraged to actualise its terms of reference.

Earlier, Dikio explained that his visit was part of his ‘Return to the Region Tour’, a programme he initiated last year to integrate all critical stakeholders into his vision to actualise the original mandate of PAP.

He said on assumption of office, he observed that the major reason why ex-agitators regularly trooped to the streets in protest was lack of payment of their allowances.

Dikio said he made it a deliberate policy that the monthly stipends for the agitators must be paid on the 25th of every month, adding that despite the hiccups in June, the allowances were paid on 21st ahead of schedule.

He told the JTF that the PAP reorganised the training approach to make ex-agitators successful entrepreneurs through the model of train, employ and mentor.

Dikio disclosed that ex-agitators, who had already acquired skills, would be constituted into cooperatives and attached to Small and Medium Enterprises (SMEs) on three identified platforms of food security, maritime security and maritime transport.

He said Amnesty delegates, after their meeting in Agadagba, resolved to tame kidnapping and piracy on the waterways adding that PAP would seek areas of collaboration with the Chief of Naval Staff on maritime security.

Dikio added that he was partnering with the Bayelsa State Government to revive the moribund 500 fish ponds in the state to be used as a training facility for ex-agitators on fish farming.

He said, “We noted from the beginning that the major issue that led to their outpouring on the street was the lack of payment of their allowances. We have taken measures to ensure that their payment is received regularly and timely and we set for ourselves 25th of every month as their pay day.

“This month we started payment on 21st. We paid ahead of schedules. The kind of training they received in the past was not adequate to prepare them for reintegration. So, we have decided to train, employ and mentor. We are around to check facilities where we can train, mentor them before they can own their businesses.

“We recognise that some of them have acquired some skills and we have decided to form them into cooperatives and match them with the appropriate SMEs. We have three platforms, food security, maritime security and maritime transport.

“We got a commitment from the leadership of the Amnesty delegates after their meting in Agadagba. They issued a communique that they are prepared to help in taming kidnapping and sea piracy. Over the coming years, we will be seeking avenues of collaboration with the office of the CNS.

“There is 500-pond fish farm in Bayelsa that is moribund. We are working with the government to activate the ponds to use them as training for our boys to increase the employment potential in the region”.

Previous Dikio has rekindled our hope in Amnesty programme – Ex-agitators Next PAP To Sponsor Education Of Exceptional Students Of BMU, Says Dikio