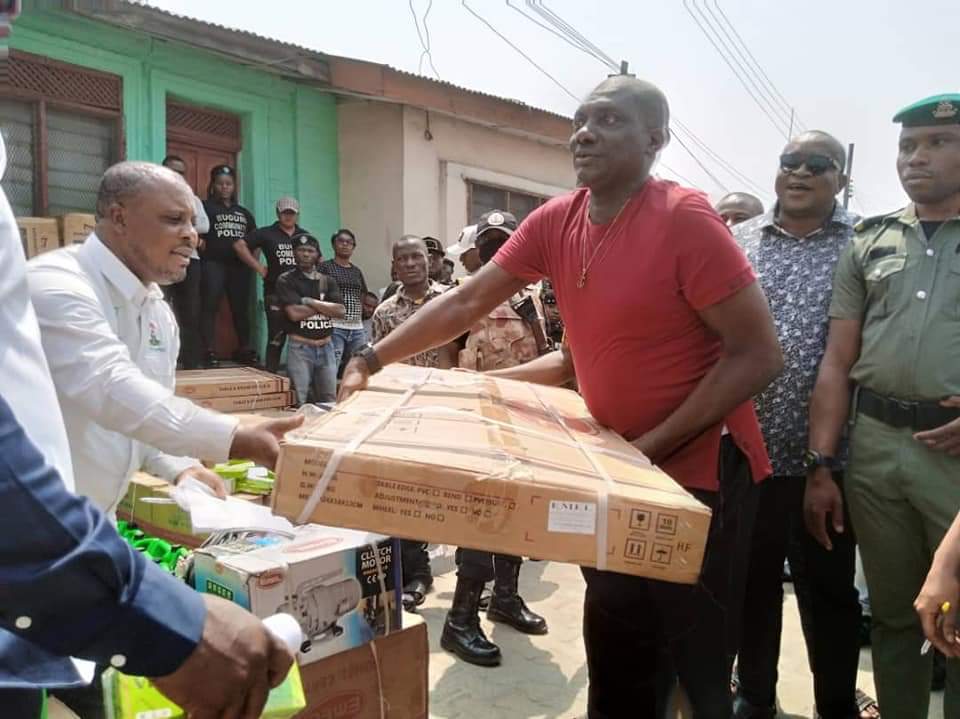 Two Hundred and Fifty persons in communities impacted during the Niger Delta crisis in Buguma Local Government Area of Rivers State and its environs were given starter packs in various trade areas at the weekend, as the Presidential Amnesty Programme unveils a robust empowerment programme for the year.
Among the beneficiaries were men and women drawn from communities where a leader of ex-agitators, Chief Sobomabo Jackrich, also known as Egberi Papa, had camps.
Items which included 250 Sumec generators, 16 high capacity Omaha generators, sewing machines and accessories, wooden tables, welding machines and engine oil, were distributed to the beneficiaries on Saturday in Buguma, headquarters of Buguma Local Government Area.
The starter packs are to enable the beneficiaries set up businesses in their respective trade areas in an empowerment drive aimed at engagement of ex-agitators enlisted in the Presidential Amnesty Programme as well as residents of communities in the Niger Delta impacted during the period of armed agitation.
Coordinator of the Amnesty Programme, Prof. Charles Dokubo, said though his mandate was to train and empower beneficiaries captured in the database of the Programme, it was imperative to offer assistance to residents of crises impacted communities towards deepening peace in the Niger Delta. ​
“This is a special empowerment for people who are not among the 30, 000 beneficiaries captured in the Presidential Amnesty Programme; it is meant for people in crisis impacted communities in the Niger Delta. It is to demonstrate that the Amnesty Programme is indirectly for all the people of Niger Delta and we care for you.
President Muhammadu Buhari is conversant with the situation of the Niger Delta people and he is committed to turning around the narrative. President Buhari loves you and will ensure that the Niger Delta is stabilized and gets its right place in the country, especially in terms of infrastructural development”.
While urging residents of the communities to avoid violence and support the Federal Government to actualize sustainable peace in the region, he warned recipients of the starter packs against selling the items, but to make judicious use of them to better their lives.
​ This is the fourth time residents of communities impacted during the Niger Delta crisis are being empowered by the Amnesty Programme since Prof. Dokubo assumed office.
Thousands of persons drawn from various communities in Rivers, Bayelsa, Delta, Edo, Cross Rivers, Imo, Ondo, Akwa Ibom and Abia states, got various items as starter packs in February, 2019 in Warri, Delta State; Opukiri, Ogwashukwu, Abonnema and Degema. Others include Auchi, Edo State, Yakkur/Calabar South, Cross River State; Eket/Ikot-Ikpene, Akwa Ibom State; and Ohaji Egbema/Owerri in Imo State; Ilaje/Okitikpupa, Ondo State, as well as Ukwa East/West and Umuahia North/South, Abia State.​ ​ ​ ​ ​ ​